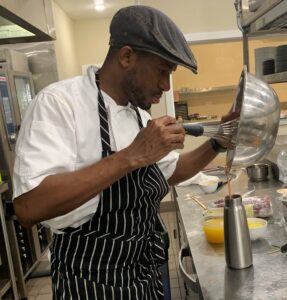 Chef Terry’s passion for cooking started at home with interest coming from his mother and grandmother’s cooking. A former student of St. Joseph’s Academy and Princess Margaret School, Christopher went on to receive his Associates Degree in culinary arts from the Antigua & Barbuda Hospitality Training Institute. During his studies at the institute,  he worked as a commis cook at the Trade Winds Hotel, which is where he was first introduced to a professional kitchen.

In 2009, he was given the opportunity to be a part of the opening team at the Sugar Ridge Hotel, where he was quickly promoted to Chef de Partie. In 2010, Chef Terry was awarded Young Chef of the Year by the Antigua Hotel’s and Tourist Association. It was during that same year that he was selected to be a part of Team Antigua for Taste of the Caribbean, where his team won both silver and bronze medals.

His career was quickly taking off as he competed in numerous local competitions, such as the Mango Festival, the Seafood Fiesta, the Wadadli Music Festival Cook Off and the Smoking Hot BBQ Challenge. At the same time, Chef Terry had many of his recipes featured in several local magazines, such as Food & Drink Magazine, Liat Zing Magazine and Antigua Summer Guide.

In 2012, while working at both the Jumby Bay Resort and as a private chef, Christopher started the youngest award winning BBQ team of the Caribbean called the Smoking Grillers. His team travelled far and wide competing and winning medals in BBQ competitions, including events in Antigua, Puerto Rico and Tennessee. In 2014, Chef Terry took his love of BBQ to another level when he completed a certification in professional BBQ from the Texas Beef Council.

After a stage at Le Talbooth in England to further his international knowledge and experience, Christopher enrolled at Johnson and Wales University in North Miami, Florida to pursue a Bachelor’s Degree in Culinary Arts and Foodservice Management.

While at the university, Christopher continued participating and winning in many culinary competitions. He also pursued outside certifications, such as the Wine Spirits Education Trust’s (WSET) Level 2 Certification, as well as continuing to gain experience in local restaurants and resorts. A few of these opportunities were a Junior Sous Chef’s position at the Ocean Reef Club, a Private Chef for an American NFL Football Player, and a paid apprenticeship with a well-known Florida ice carver.

After his graduation from JWU in May of 2014, Chef Terry traveled and worked in many well-known establishments and represented Antigua & Barbuda at Caribbean Week NYC in the years 2015, 2016 & 2018. From 2017 to 2019, he held the position of Sous Chef at Sandals Royal Barbados 2017-2019. In April 2019, he received the Artisan Award at the Antigua & Barbuda National Youth Awards. Most recent, Chef Terry obtained his certification as a Chef De Cuisine form the American Culinary Federation (ACF). Currently, Christopher is the Executive Sous Chef at Hammock Cove Resort in Antigua

Culinary School Stories is a proud member of the Food Media Network! Copyright 2020