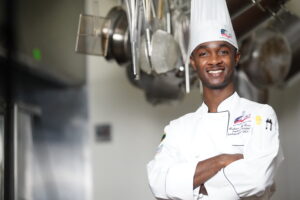 Born and raised in Akron, Ohio, Ashten Garrett began his professional culinary career when he was 16 years old washing dishes in a high-end fine-dining restaurant. After graduating High School, Ashten was selected to be on the opening executive board for the ACF Young Chefs Club. He served for two years as the very first ACF Young Chefs Club Eastern Regional Vice President, before accepting his current role as an ACF Young Chefs Club Ambassador.

His most notable accomplishment includes winning on Food Network’s Guys Grocery Games in 2020. Currently residing in Cleveland, Ohio, Chef Garrett is employed at the Marriott International at Key Tower as a senor culinary arts manager where he finds great pleasure creating wonderful culinary experiences for others to enjoy.