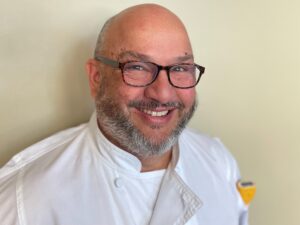 Jorge de la Torre is the Director of Culinary Arts for Kitchen Network-Park Hill, a non-profit incubator/accelerator/commissary for minority owned businesses and a workforce development learning center in Denver, Colorado.

Chef de la Torre graduated from the University of New Mexico with a bachelor’s degree in business before going to the California Culinary Academy in San Francisco. After graduation from culinary school, Jorge worked at various restaurants in San Francisco and Hawaii. He then moved to Vail, Colorado, and worked for Vail Associates and was a chef/owner of a restaurant. He also worked for Whole Foods in Denver, many catering companies, and a steakhouse in NYC before finding his true culinary passion to teach.

In 2001, Chef de la Torre began his career as a culinary educator, starting as a chef instructor for The Restaurant School at Walnut Hill College in Philadelphia, PA. He joined Johnson & Wales University at their Denver campus in 2002 as the director of culinary operations. He received his master’s degree in Adult Education from Colorado State University in 2005 and was promoted to the position of dean of culinary education, a position he held until 2021 when the campus closed.

Jorge is on the board for We Don’t Waste, a nonprofit that picks up food from restaurants, stadiums, and caterers to distribute for free to those in need. Chef de la Torre is also a council member for CHOW (Culinary Hospitality Outreach and Wellness), which deals with the mental issues found in the culinary world.