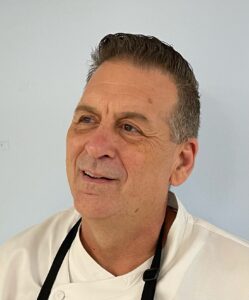 Chef John-Michael Collins was born in San Diego, CA and from his earliest memories growing up he can remember a life full of abuse, including physical, mental, and sexual. John-Michael tried to end his life at the age of 10 though thankfully his grandparents stepped in to rescue him from the foster system. Due to this traumatic upbringing, he never believed in himself, nor though he deserved anything good, which he believes is what set him up to make a lot of bad choices throughout the early parts of his life.

These bad choices are what eventually caused him to end up in Federal Lockup for several years. While incarcerated, John-Michael ended up in the kitchen, starting in the dish room. However, he was a fast learner and quickly moved up the ranks to become the number two cook and the person who prepared the food for the officer’s mess dining room.

Once released, he found himself at a halfway house in Washington, DC with suggestions to seek out and apply for formal culinary training at the DC Central Kitchen (DCCK). He eventually applied, was accepted, and ended up graduating. After completing his training, he accepted a multi-week internship at The Ritz-Carlton, Pentagon City, which eventually turned into full-time employment.

Chef Collins still currently works for the Ritz Carlton as a cook one but is looking forward to the next step in his culinary journey as he applies for various sous chef positions within the Marriott Company. However, an even more important goal for John-Michael is to become a beacon of hope for those coming behind him, and to continue to give back to his community by bringing people together through the avenue of food.

“Introduction to Podcasting for the Hospitality Professional” course – https://foodmedianetwork.com/courses/