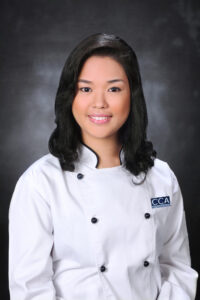 Joyce Esther Calayag was 16 when she began her formal culinary training at the Center for Culinary Arts in Manilla. She remembers that at the time this decision was not supported by her Filipino parents who were very traditional when it came to education. To them, culinary training was considered a vocational hobby and frowned upon. Coming from a family of doctors and engineers, Joyce was expected to go to college, complete a 4 year degree and then follow in the same path as they did.

Of course, this put a tremendous amount of stress on Chef Calayag. Even before she began her studies, she had constant hesitation and self-doubt. On top of this, she couldn’t really afford the culinary school tuition because in the Philippines they don’t have student loan programs. Instead, students are dependent on their parents to pay for college or university. Luckily, her siblings pitched in and they were able to cover Joyce’s first year tuition. However, Chef Calayag was going to have pay after that so she immediately started applying for various scholarships so that she could continue pursuing her degree. Through her due diligence and perseverance, Chef Calayag was awarded a full academic scholarship for the remained of her studies.

Enrolling initially to study culinary arts, Chef Calayag ended up switching to baking and pastry after the first year. French macaron and L’Opera gateaux are the two recipes that still inspire her to this day! Today Chef Calayag is a chef instructor who teaches students that are just like herself, who are pursuing their culinary dreams. And now many of her former chef instructors are her colleagues and supervisors. As an culinary educator for over three years, Chef Calayag still believes that cooking and baking are magical, with food being the common bond that connects and brings us together!

Being a young professor, Chef Calayag recently made the decision to pursue a Master’s Degree in Adult & Vocational Education so that she can share even more knowledge with her students and be an effective mentor. Though she still believes the road to becoming a chef is not a glamorous route, but one that is physically demanding, mentally strenuous, and emotionally exhausting, she has no regrets and wouldn’t change a thing. Like all investments, it requires growth which takes time. There is a sacred concept that Chef Calayag and the other faculty at her school share and that is, “Students are like kernels of corn, and when given heat or pressure, the kernels will pop. We know that every popcorn kernel doesn’t pop at the same time, but eventually they will!”

If you enjoy the podcast, please consider leaving a short review and ratings on Apple Podcasts / iTunes if you have an iPhone or iPad. It takes less than 30 seconds, and it really makes a difference in spreading the word, getting new listeners and guests, as well as sponsors!

Culinary School Stories is a proud member of the Food Media Network! Copyright 2020