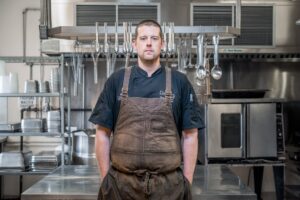 Chef Jesse MacDonald had no aspirations of becoming a chef when he was growing up in Launching, Prince Edward Island. His childhood home was located on the corner of his grandfather’s large family farm, so he was able to spend ample time as a youngster gaining an appreciation for all things local.

In middle school he quite innocently got a summer job washing dishes at Rodd Brudenell River even though he was born into a fourth-generation lobster fishing family. By the time Jesse graduated high school he was one of the lead cooks in the resort’s main dining room. It was then that he decided to pursue cooking as a career and ended up enrolling that fall at the Culinary Institute of Canada, where he graduated from in 2010.

Chef MacDonald spent time during and after culinary school apprenticing under Chef Warren Barr, formerly of The Inn at Bay Fortune, as well as Chef Dave Mottershall, formerly of Terre Rouge and Red Shores Racetrack & Casino, before accepting his first Sous Chef position at an Italian restaurant in Guelph, Ontario. After spending some time exploring the vast dining scene of Ontario, he took an extended trip to Europe where he was able to secure stages in hotels and restaurants in France & Italy. Although he considered staying longer term, he ultimately decided to head home to Prince Edward Island.

Chef MacDonald then accepted a position with Rodd Hotels & Resorts as Sous Chef at Rodd Brudenell and after three seasons, he was offered the position of Executive Chef at Rodd Miramichi River Hotel in Miramichi, NB. After 4.5 years there, Chef MacDonald was given the opportunity to become Executive Chef of Rodd Crowbush Golf & Beach Resort, as well as Corporate Culinary Ambassador of Rodd Hotels & Resorts.

Click the video to listen to the episode on our YouTube channel where you can view a few visuals at the same time.

Our YouTube channel is also where we post the video highlights of all of the interviews so be sure to check them out on the channel as well!