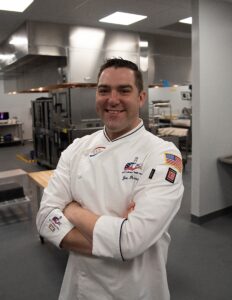 Joe Peroney’s culinary career began in 2007 after his division with SONY Electronics outsourced all production overseas. Given the chance to pick a new career path, Joe enrolled in the culinary arts program at Westmoreland County Community College in Youngwood, PA. During his time at Westmoreland, Joe would serve as team captain for their ACF culinary knowledge bowl team and lead them to second place victory at the ACF nation convention in 2011. Joe would earn his degree in culinary arts, as well as a degree in dietetic technology, graduating in the spring of 2011.

Upon graduation, he accepted a position at The Greenbrier Resort under Rich Rosendale CMC where he would spend the next six years. He would spend three of those years training under the culinary apprenticeship program, where he graduated at the top of his class, and was quickly promoted to sous chef and later chef de cuisine. While training at The Greenbrier, Joe also competed in 9 ACF sanctioned competitions, including ice carvings, buffet platters, five course, hors d’oeuvres and hot food competitions.

Joe then moved to metro DC to open Roots 657 and the RC Culinary Lab with Rich Rosendale CMC. He would become the research and development chef for both properties and join Chef Rosendale hosting a variety of cooking classes such as modern equipment, sous vide, BBQ and CMC training. In February of 2020, Joe traveled to Stuttgart, Germany to represent the United States as a member of the ACF Culinary Team USA Regional team in the 25th annual IKA Culinary Olympics. The regional team earned a gold medal and was ranked third in the world for culinary artistry. Joe also competed as an individual at the IKA Culinary Olympics and was rewarded with a bronze medal for his work. Joe recently accepted the Chef de Cuisine position with The Rolling Rock Club.

Click the video to listen to the episode on our YouTube channel where you can view a few visuals at the same time.

Our YouTube channel is also where we post the video highlights of all of the interviews so be sure to check them out on the channel as well!